from the pages of 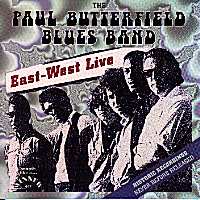 Rock & roll prophets without honor, the Paul Butterfield Blues Band -- in its original incarnation with ace guitarist Mike Bloomfield -- made its greatest musical strides from 1965 to 1967, caught in the matrix of the Top 40 pop revolution and the quantum leap of psychedelia. But in that time, the mighty Butterfield lineup with Bloomfield and second guitarist Elvin Bishop laid the cornerstone for blues rock and then upped the ante by incorporating extended improvisation influenced by modal jazz and Indian classical music.

The best example of that vision and fiery virtuosity is the 1966 album "East-West"; on the 13-minute title track, the Butterfield band combined elements of John Coltrane, Ravi Shankar, the Yardbirds and the Byrds' "Eight Miles High" into an audacious, spiraling jam. Tales of the group's high-voltage live explorations of "East-West" have circulated for years; the three takes on "East-West Live," recorded onstage in clubland low-fi and collated by Butterfield keyboard player Mark Naftalin, confirm the legend. The performances -- one from early 1967 and two from 1966 -- bristle with the excitement of a band sailing headfirst into uncharted waters.

Bloomfield, who died in 1981, is the unquestioned star of the record. Lacing bluesy lines through Eastern-flavored permutations, he sets up a series of rough-hewed melodies that form a road map for the rest of the band, particularly the passionate blowing of Butterfield on harmonica. Bloomfield may not have played with the gutsy finesse of Eric Clapton or the sonic invention of Jimi Hendrix, but he was a bold musician with both facility and imagination.

The 1966 tapes mix the spark of discovery with the hesitancy of the new. By the time of the 1967 recording -- a 28-minute monster recorded just before Bloomfield quit the group to form the Electric Flag -- the Butterfield band had mastered the tune and its potential, adding new motifs in a suitelike form. You can hear the genesis of the jam aesthetic that stretches from the early Allman Brothers Band to Blues Traveler and beyond. One of the finest archival projects of the year, "East-West Live" fills in a crucial gap in the histories of a great American band, an underappreciated instrumentalist and even rock itself (RS748).

from the pages of

Serious blues fans and scholars are going to eat this up! Last year, Winner released Strawberry Jam, which was a collection of of live tracks recorded on portable tape decks. Now Winner has released the ultimate companion piece to Strawberry Jam, East-West Live, featuring three recordings of the classic "East-West," also captured on portable tape decks in various clubs over a one year period (1966-67). "East-West" was a continuous experiment in ensemble improvisational blues that evolved and expanded a great deal over the 15 months the band performed it live. East-West Live allows you to turn back the clock and trace the evolution of this amazing work.

The running times are, in order, 12:37, 15:55, and 28:06. This review originally contained detailed documentation of every mode of each track...but it occurred to me that the real thrill of this CD is that you get to make the discoveries and form the opinions. Being the opinionated bastard that I am, however, I have a few observations I'm just dying to share.

Observed: every musician in this band was a monster! The late Michael Bloomfield's raga -flavored guitar solos stunned everyone from Joe Pass to James Marshall Hendrix. Elvin Bishop's stream-of-consciousness rhythm guitar playing was flawless. Mark Naftalin's piano playing was upper stratosphere (check out his work behind Bloomfield's soloing on version two, for instance). Jerome Arnold (bass) and Billy Davenport (drums) held the whole thing together and often led the way. And the late Paul Butterfield's harp playing added a texture of pure beauty that often played counterpoint to the intense fury at the surface.

Observed: One member of the band would get an idea, and within seconds, the others had caught on and expanded on it. Totally amazing.

Observed: Either Mick Taylor caught the BBB in concert, or there was an interesting coincidence...because there's a section of the first version here that sounds and feels very much like "Can't You Hear Me Knocking," which the Stones did muuuuch later.

Observed: An hour of "East-West" isn't the least bit monotonous because every section is so different.

Tracing the evolution of a song is extremely satisfying work. The people who truly appreciated the Beatles Anthology CDs know this. East-West Live is an incredible document, and an opportunity to get inside the minds of some amazing musicians.